As part of a major renovations project at Vandenberg Hall,a 40-year-old, 6-story dormitory at the US Air Force Academy,eNAD recently installed a roof-top solar panel system that is expected to provide 325,000 kWH of power for the building.In order to promote energy efficiency, 54,000-sf of roofing membrane was replaced on the east tower with a Building Integrated Photovoltaic energy-producing roof using 136 thin-film photovoltaic laminate panels. 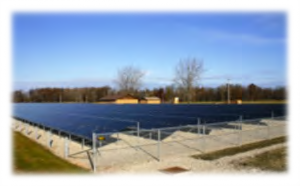 Under contract to the Ohio National Guard, eNAD designed and constructed a 225-kW, ground-mounted solar array to tie into an adjacent solar array. Together, both solar array fields occupy 4 acres and produce a combined 538-kW of power. The scope of work involved installation of 1,122 solar panels measuring approximately 6 ft by 3 ft, and weighing roughly 70 pounds each. The panels use thin-film technology, and reduce installation costs with fewer home runs to the inverters. Through use of their specialized connectors, the electrical connections made in the field have been simplified while still producing a high power per panel. It is the first panel in the industry with a 1500V certification and is the industry’s first solar panel specifically designed for utility scale deployment. Camp Perry was one of the first sites. 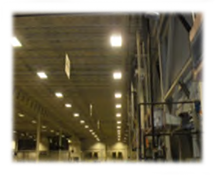 ENAD replaced the roof-top ventilation and lighting system at Building 499, the Defense Distribution Depot, with a high efficiency cooling and lighting system that conserves energy and promotes a more comfortable work environment. The existing ethylene propylene diene monomer (EPDM) membrane on the roof of the 750,000-sf building was coated with a new highly reflective, electrometric/acrylic coating. The coating has a minimum initial solar reflectance of 88% and provides increased insulation, resulting in an estimated 30% reduction in energy costs. The project also involved the installation of temperature and humidity sensors, which were installed and integrated into the building automation system. All of the systems in six different zones are now monitored and automatically controlled by a central control system to improve management of heating and cooling costs. The existing 400-watt, metal halide, high-intensity discharge (HID) lighting was replaced with 1,200 new 6-lamp, T-5, high-output, high-bay, fluorescent fixtures. In addition to increased energy efficiency, these fluorescent fixtures operate at lower temperatures resulting in less heat dispersed throughout the building. 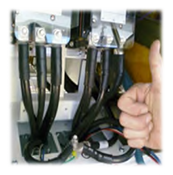 ENAD designed and constructed the upgrade and expansion of the existing Energy Management and Control System (EMCS) on Base to a Honeywell Enterprise Building Integration (EBI)/Energy Management System with new graphics. The improvements were needed to enable the gas and electric meters on Base to communicate with the EMCS and to replace outdated graphics and controls. The scope of work included the retrofit of 25 gas meters with new conduit and wiring to provide pulse output; the installation of 36 new electric meters with two substations and meter boxes and current transformers (CTs) using open protocol communication (Modbus) and programmed into new EBI/Energy Manager system; and the programming of EBI/Energy Manager servers with anti-terrorism/force protection software for electric meters and gas meters. 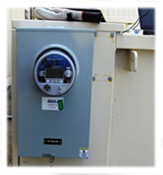 New electric meters, current transformers, radio transceivers, radio repeaters, and servers were installed at various locations at seven separate Air Force installations. The new meters are compatible with the upgraded EMCS system at each Base and include energy management software to communicate and interface with other third-party energy management software platforms. ENAD provided a secure wireless infrastructure solution for each base and completed a radio path survey for each installation to receive wireless infrastructure. As a result of the project, each Base became compliant with EPACT 2005 and with the facility electric meter guide specifications. Electric meters were provided with wireless radio transceivers which transmit the meter data and provide it to the remote operation control centers where the servers are housed. All programming, including graphical front-end, archival and report generating software, and any additional licensing necessary to allow integration with up to two additional existing/new controllers, was provided. 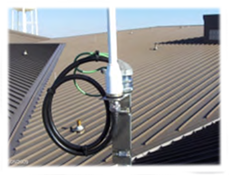 At Laughlin AFB, ENAD performed the technical evaluation, design, procurement, and installation of 29 new gas meters in 22 buildings and the replacement of one existing turbo meter at the Base primary gas feed. Pulse kits were installed on each meter. The project was needed to bring Laughlin AFB into compliance with the Energy Policy and Conservation Act (EPACT) 2005 and Unified Facilities Guide Specifications (UFGS) natural gas metering requirements. The main gas feed turbo meter near the West Gate was also replaced.

Repair of Electrical Distribution System, Grissom Air Reserve Base, IN

A 12,900-ft runway at Dover AFB was reconstructed by LTC, along with the design and installation of new lighting and signage systems. Under this project, ENAD installed runway edge lights, taxiway edge lights, threshold lights, and guidance and runway distance of remaining signs. Electrical work included demolition of the electrical systems in conjunction with the pavement demolition; removal of existing light fixtures and bases, handhole/manholes, and signs and bases; installation of ductbank, manholes and vaults, cable, and lights; runway and taxiway lights; and signs. In addition, all circuits in the vault were removed and replaced. In all, 111 miles of electrical wire was installed.

ENAD designed and constructed security upgrades at MUTC consisting of four new entry control points (ECPs), a security office, and a video surveillance system using 42 cameras and fiber optic cabling. The communication systems connect each ECP and the physical barriers and gates at each ECP with the security office. A single-story, 1,000-sf security building was also constructed at the site with a monitoring area for surveillance video equipment. Surveillance cameras are network and fiber-optic compatible so data can be quickly and easily distributed throughout the campus. Fixed or FLIR cameras for daytime and nighttime use were installed in protective housings with heaters and blowers and secured to poles or buildings. An analytics server was also installed in the security building, which has the ability to detect people events (e.g., an individual loitering or stopping or starting in the wrong direction); car traffic events (e.g., speeding or making an illegal u-turn), counting events, premium events (e.g., an object left unattended), or video/camera events (e.g., a lost signal).

At Andersen AFB, ENAD installed 20 tower assemblies to comprise a new runway approach light system. As per UFC regulations, the light stations were installed 100 feet apart, with the first station located 100 feet from the end of the runway. Approximately 2,000 linear feet of underground concrete duct bank with conduit and wire were installed for the 20 tower locations. New concrete foundations and electrical hand holes were installed for each light tower. Electrical work included installation of new 5kV wire and transformers for the five approach lights on each tower. For the SFL system, TolTest installed SOOW power and control cable from the Master Control Cabinet (MCC) to junction boxes and Individual Control Cabinets (ICC) panels were installed at each tower for the strobe lights. A new main master control panel for the strobe light system was also installed. The completed approach light system was connected to existing power and control systems on the air field located near the end of the runway. The system was brought online, tested, and eventually received Federal Aviation Administration certification.